Pay-per-click (PPC) is an advertising model that lets marketers place ads on an ad platform and pay the host of that platform every time their ad is clicked.

The goal of a PPC ad is to lead the person viewing it to click through to the advertiser’s website or app, where that visitor can complete a valuable action, such as purchasing a product.

Search engines are incredibly popular advertising platforms. They allow you to display ads that are relevant to what users are searching for. 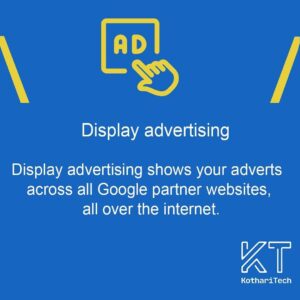 Display advertising shows your adverts across all Google partner websites, all over the internet refers to the process of advertising a product or service through visuals like images and videos on networks of publisher websites such as the Google Display Network and Facebook, etc. Display ads are placed on relevant third-party websites in the form of banner, image, and text ads. Display advertising is pretty much a blanket term that includes every visual ad placed on a website

If connecting with customers socially is your preferred way of marketing your goods, social media advertising might be for you. Facebook Ads give you a lot of options to find and reach your target customers. Facebook updates its ad platform regularly with new features and targeting options Compared to Facebook and Twitter, the budget and targeting options of LinkedIn Ads are simpler People use LinkedIn to manage their professional profile and interact with other professionals. 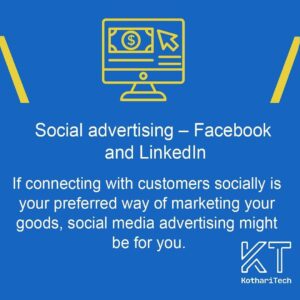 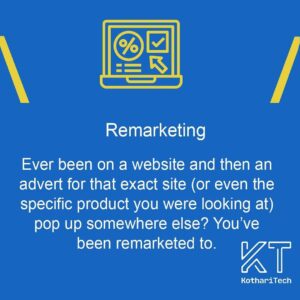 Ever been on a website and then an advert for that exact site (or even the specific product you were looking at) pop up somewhere else? You’ve been remarketed to Remarketing (also known as retargeting) is the tactic of serving targeted ads to people who have already visited or taken action on your website. In terms of technical execution, remarketing is the process of using a javascript tag (known as a pixel) to place a cookie in the user’s browser. The cookie then informs a remarketing platform to serve specific display ads through an ad exchange, based on the pages or products the user has engaged with or searched for on your website or app.

This isn’t technically a separate category to remarketing in general, but it’s often forgotten so we wanted to give it some prominence is a method of remarketing that focuses on an audience based on their previous actions. It tailors the message according to where the user is in the buying cycle, what actions he or she has taken, and how he or she interacts with the brand. When each of those scenarios occurs, the advertising is based on the user’s previous action; a person who visited and left is shown an ad. When they return, they’re shown a new ad that’s related to the previous, telling a story to help encourage them along in the buying process 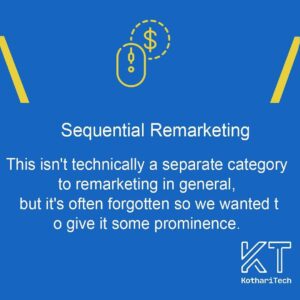 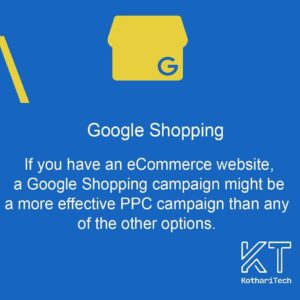 If you have an eCommerce website, a Google Shopping campaign might be a more effective PPC campaign than any of the other options Google Shopping is a service provided by Google. It allows customers to search for, view, and compare products. These products are displayed when a customer uses Google to search for a product. They can appear in the main search engine results page or under the shopping tab. For example, when a customer types ‘red running shoes’ into Google, they may see sponsored ads appearing at the top of the page.

A Step Towards Digital

Home
About us
Services
Clients
Careers
Contact us
Support
Blog